The Steve that I understood 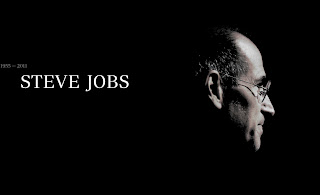 It's just amazing as to how a person so remote could have such a dramatic impact on your life. His authority as a visionary has well been documented. We all love the products he invented. For the record he invented the "personal" computer, the GUI, mouse, designed master piece computers (Macs), the iPod, i phone, i pad and i tunes, great software such as Mac OS, iOS and of course the animated movie industry with Pixar.

To me he was a lot more. He was the best showman of our time. His method of presentation was a game changer. It set the standard for modern presentations.

He was indeed the Michael Angelo of our time. He was also the Edison of our time. Probably the only man ever to combine both the left and the right hemispheres of the brain to that extent!

The tenacity in which he pursued his passion has in it's own right created an impact around the world unlike any politician of our time. It was he who was instrumental in the concept of "designed in California and assembled in China". Todate they have a very successful model for this new world order.

Many say he defied marketing principles. He was famous for saying that consumers do not know what they want. Contrary to the popular belief he was indeed inline with the basic principles of marketing. He was probably the only person who could see, envision and anticipate so many game changing products. No doubt he was the best contemporary marketeer!

However his greatest legacy is none of the products he helped invent but probably the greatest institution of our time. Many feel with demise of Jobs Apple will be doomed. However the greatest second act of the history of modern business was all about creating an organization that could think 'Steve Jobs'. He was instrumental in putting together an all star executive team. As an avid Apple follower we know that he put together several initiatives to institutionalize the Apple way of thinking for future generations of Apple employees.

As always the real test for Apple as an organization will come after 4-5 years when the current lineup of products will see the daylight.

Steve's ultimate success could be measured on the success of variety of products they might launch 5-6 years down the line. Time will tell. Till then we wait.

(Picture : courtesy of www.wired.com)
Posted by Welcome to Dassalessons @dassaonline at 5:37 PM

Welcome to Dassalessons @dassaonline
As a student of life I'd like to learn from every experience. The blog is dedicated to capture those experiences and share the same with like minded people who value reflecting upon the same. Readers are invited and encouraged to share their views on blog articles. Those views expressed by readers will enrich the content make an open discussion. Thus the learning evolves.

A Chartered Marketer by profession Priyanga obtained his MBA from the Postgraduate Institute of Management University of Sri Jayewardenepura. A product of St. Benedicts' College, at present he works as a Senior Sales Manager handling Sri Lanka and Maldives for one of the Fortune 100 technology companies.

An avid reader both in printed format and internet, Priyanga is passionate about people development.
He is a visiting lecturer on Leadership, Strategic Marketing Digital Strategy, Managing Corporate Reputation and Change Management for several Postgraduate and Diploma programs in Sri Lanka.